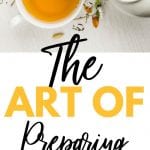 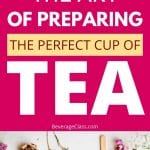 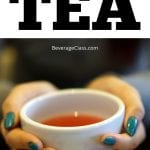 The perfect cup of tea requires patience and the right tools. This is the art of preparing tea. Here are some important rules to follow so that you make the best cup of tea, which is especially important if you drink tea daily.

Life’s too short to have bland tea!

How much does preparing tea matter?

Although you can throw teabags into a mug and pour boiling water over them, there are details about making a cup of tea that really influences how the tea tastes. They also help to preserve the healthy compounds that are present in tea.

Learn the Art of Preparing Tea

With that in mind, let’s look at some important tips and tricks for making the perfect cup of tea, as well as some steps you should follow before drinking your must-have morning cuppa.

Before you start making your tea, make sure the teapot and cup have been warmed up.

This will ensure that the flavor of the tea will be released into the water much quicker. If you use a cold mug or teapot, this will bring the temperature of your water down, which isn’t good for making the perfect cup of tea.

Leave It For Two (Then Six) Minutes

If you make your cup of tea really quickly, you’re not giving the tea a chance to release it’s healthy, delicious flavors.

Researchers from the University of Northumbria School of Life Sciences (via Telegraph) tested how to make the perfect cup of tea for 180 hours and they found that the best way to make tea with a tea bag is to put it in your cup and leave it for two minutes before drinking it.

They also said that you should then remove the teabag from the water and add in the milk. Before drinking it, leave it for six minutes so that it has a temperature of 60 degrees Celsius.

When it comes to how long you should steep tea, follow this general guideline: the darker the tea leaf, the longer you should brew it for, as tea expert Angela Pryce tells The Mirror.

Although you want a hot cuppa, you should avoid making tea with super-hot water as that can cause the tea to taste bitter. How hot your water should be when you make tea does vary according to the type of tea you’re making.

As for white tea, you should ensure the water temperature is between 76 and 85 degrees because anything hotter will ruin the delicate flavor of white tea. Oolong tea needs water that’s a temperature between 82 and 87 degrees.

You want to preserve the flavor in your tea, so make sure you store tea in an airtight container.

This is because tea is hygroscopic, meaning that it absorbs both odors and moisture. Keep the tea container away from any light and heat, ensuring that it’s in a cool and dry place.

Put Milk In After Water

If you want to add a dash of milk to your tea, always do so after you’ve put the water in your cup and allowed the tea to steep a bit.

If you put milk before water, then you’re disrupting the water temperature that’s required to help you make a delicious cup.

The art of preparing tea starts with using the right water. If you’re making tea with tap water, it should be cold because hot water contains more minerals, such as lime and calcium, that will interfere with the tea’s flavor.

You should also avoid making tea with water that’s been in your kettle for hours or that’s been previously boiled because it will make your tea lack flavor. This is because water contains oxygen and if you boil the water too much, this decreases the amount of oxygen it has, which can alter the taste of the tea.

If you’re worried about wasting water, always make sure you boil just enough water for one cup so it doesn’t go to waste.

If you end up with more in the kettle, use it for other tasks, such as for drinking or watering your houseplants, instead of throwing it down the drain. When you live in a region where there’s hard water, this can be interfering with your ability to make the perfect cup of tea.

The reason for this is because the water will have magnesium and calcium in it – you might even see it forming a scummy layer on the top of your water. Using a water filter can help to reduce and remove these materials from your tea.

Get The Right Teapot

Not all teapots are good for the type of tea you want to make.

If you want to make black tea, investing in an iron teapot is a good choice. This is because iron holds onto heat for a longer time than other materials, and since black tea needs to be brewed in hotter water, it’s a good teapot to purchase.

On the other hand, a glass teapot is good for holding onto heat but not giving your water temperature too much heat, so these teapots are useful for making white and green tea.

What about teapot size?

The teapot should be a large one that’s capable of holding at least eight ounces of water, which is one cup. But other characteristics of the teapot are much more important to consider. The art of preparing tea relies on a careful selection of accessories, teapot included.

The best teapot if you’re brewing your own tea is to choose one with a removable infuser basket. This allows you to control the tea strength. You can also use these teapots as regular teapots, such as when you make tea with tea bags.

How To Brew Tea With Loose Leaves

If you like the idea of making tea with loose leaves instead of teabags, these are the steps you should follow to make the perfect cup of tea:

There are many different ways to brew your own perfect cup of tea at home, but a method that’s worth trying is the Gongfu Tea method.

This originates from China.

How To Make Tea With The Gongfu Method

Make sure you follow these temperature requirements for different teas:

Enjoy smelling the aroma of the tea in the aroma cups.

Once the tea has been in the aroma cups for a few minutes, it can be poured into a drinking cup.

The Tools You Need Depending On The Type Of Tea

If you have larger tea leaves, you’ll need a tea strainer.

Ensure that it fits snugly within the teapot or cup opening. If it moves around, then the leaves will sneak out of the strainer and end up in your cup of tea.

On the other hand, if you have finer, powdered tea, you should use disposable tea filter bags that will prevent the tea particles from getting into your cup.

The strainer to avoid is a tea ball infuser if you are making tea with large leaves as these products are too small to allow the leaves to move and unfurl, which is how they enhance the taste of your tea.

In addition, as wikiHow points out, using a tea ball infuser for powdered tea is also not recommended as the powder particles will be able to slip through the tea ball infuser’s holes.

Pro tip: One of the best tea infusers to use is one that’s a basket infuser. This is large enough to accommodate large tea leaves so that they can release their delicious flavor and versatile enough to be used with teapots or mugs.

Use A Porcelain Cup

The art of preparing the perfect cup of tea demands the right tools for the job. The cup you use to drink your tea will directly affect its taste.

If you use a metal cup, this will make your tea taste a bit metallic.

On the other hand, if you use a plastic cup, the tannins from the tea will stick to it.

And, if you like ceramic cups, they can make your tea cool down too quickly because they’re porous.

The best cup to drink tea out of is one that’s made of porcelain because it retains the heat of the tea without affecting the tea flavor you’ve worked so hard to perfect.

Can You Reuse Tea Leaves?

You can indeed reuse tea leaves to make a second cup, although the caffeine and flavor in the tea won’t be as powerful.

How you reuse your tea also depends on the type of tea.

Your Brain Plays A Part In The Perfect Cuppa

While you might follow all the steps to making a tasty cup of tea, here’s an interesting thing to bear in mind: how your brain perceives the cup or mug you’re using to drink tea can play a part in how the tea tastes. Do what does your brain have to do with the art of preparing tea?

This is what Dr. Stuart Farrimond, an expert in the science of making tea, has reported, via The Independent.

What About Making A Cold Brew?

During the summertime, you might want to enjoy a refreshing cold cup of tea instead of a hot one. The art of preparing tea can mean a lot of things for different people, and hot beverages are not always a go to.

If so, then you need to brew your tea leaves a little differently.

When choosing the number of tea leaves to make in a cold brew, you should opt for about 1.5 times more leaves than the quantity you’d use to make a hot brew.

A good way to make a cold brew of tea is to put your tea leaves into a jar and pour cold water over them. Let it steep for a few hours.

Should you make tea in the microwave?

This isn’t recommended because the increase in temperature happens too quickly and this can cause your tea to lack flavor or taste bitter.

What teas go well with milk?

It’s really a matter of preference, but it’s said that milk works well with classic black teas, of which Ceylon is an example.

To prevent putting in too much milk into your tea, use full-cream milk so you will use less of it.

You might love drinking tea on a daily basis, but if you’re rushing through the process of making tea you might be missing out on the chance to enjoy a perfect cuppa every single time. Have you tried partaking in the art of preparing tea?

In this article, we’ve looked at some of the best methods concerning how to prepare tea, whether you enjoy green, black, or white tea.

We’ve also looked at important factors to help you make delicious tea, such as how long to steep different teas as well as what the best water temperature is to make your cup of tea as tasty as possible.