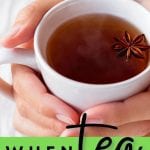 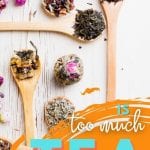 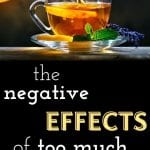 Tea is generally lauded as an all around healthy and refreshing caffeine fix that’s been trusted by generations. It tastes good, has plenty of positive side effects and provides a wide variety in taste and preparation styles. There are few other beverages that can vary so much in their flavor and variety. Although, it shouldn’t be too much of a surprise considering the fact that tea is the most highly consumed beverage in the world after water! Its popularity is on an all time rise, too! There’s more types of tea to try than ever before, and tea drinking is at an all time high. When it comes to our diets and food preferences, health factors have also played an increasingly large role in our decision making. A lot of the time it seems like an uphill battle, so we’re going to cover some of the negative effects of tea.

Negative Effects of Drinking Too Much Tea

If you’re a regular tea drinker, it’s almost certain you’ve wondered what kind of effect it has on your overall health. Tea is known the world over for its proven positive health benefits. High antioxidant content, a healthy source of revitalizing chemical compounds as well as a moderate amount of caffeine makes it very promising. That being said, there is such a thing as too much of a good thing. Tea is a drink that contains a variable amount of caffeine. It depends largely on which type of variety, how you brew it, and what you add to it that can affect that final amount. On top of that, the number of cups, size of the cups as well as other factors affects the caffeine intake as well.

Daily caffeine intake per person obviously depends on a whole lot more variables entirely. That being said, it’s safe to say that most cups of tea contain somewhere around 20-60mg of caffeine. While this might be drastically less than the average cup of coffee, you’ve still got to keep an eye on your intake of daily brew. Talk to your physician, or check with some relevant medical studies for trusted information on how much is right for you if you’re concerned.

What Tea Has The Most Caffeine?

Black tea has the highest caffeine content across the board. The reason for this is due to several factors. For starters, it has a higher level of caffeine that’s released during brewing since it’s oxidized, a key component of its processing. It’s also brewed for a longer amount of time, somewhere between 3-5 minutes with boiling hot water. In other words, not only is there a higher level of caffeine that can be extracted, but it’s released more effectively due to the temperature of the water and length of brewing.

Black tea is one that you’ll be more likely to find in people’s cups in the West. It’s consumed with milk and sugar, so the basis of our discussion will be centered around that. Caffeine, while varying across different varieties, is still a factor in the question of the negative effects of tea.

Side Effects of Milk Tea

Black tea with milk, or ‘milk tea’ as it’s sometimes known, is the decades-old practice of drinking black tea with milk and sometimes sugar. Adding milk to your tea has been shown to reduce the levels of antioxidants and potentially beneficial chemical compounds. A lot of it has to do with what gets broken down as soon as milk is added to the brewed tea. Furthermore, some people brew the tea for a very short period of time before adding milk, negating nearly all of the tea’s beneficial compounds.

A freshly brewed cup of tea is actually packed with plenty of positive health benefits. Lastly, what we know about drinking milk on a regular basis isn’t so much as certain. Some studies have shown it to be a great source of vitamins and minerals, while others cast it out as causing inflammation, and digestive issues.

Generally speaking, a healthy adult should not have to worry too much about their milk tea drinking habits. Unless of course it’s one that includes a lot of sugar. Any effort you can make to mitigate the amount of added sugar in your everyday cup of brew will ultimately prove beneficial to your health. If you’d like to give it a go, consider slowly reducing the amount of sugar you use until you aren’t using any at all. Personally, I take my tea with just a splash of milk, and I wouldn’t have it any other way!

Side Effects of Drinking Tea on an Empty Stomach

Anyone who’s tossed a cup of tea or coffee down their throat before rushing out the door for work knows exactly what this feels like. Many of us will have a rather unpleasant response to tea occupying an otherwise empty stomach. There are several reasons for this phenomenon. From a gastrological perspective, it’s said to artificially reduce the production of necessary digestive fluids in the stomach. It can also trigger a reduction in overall appetite as a result, leading to less of an intake of macronutrients which should be used to fuel your day. Caffeine is a great get up and go! But it should only be used to subsidize an already balanced nutrient intake for energy.

Unwanted nausea, heartburn and even mild anxiety symptoms can also occur from the practice of drinking tea on an empty stomach. Over acidity in your stomach first thing in the morning could be caused by drinking tea on a completely empty stomach. Heartburn, being the irritating and uncomfortable result. The straight hit of caffeine can also become absorbed too quickly without any food to serve as a base, affecting your tolerance to the same amount of tea you would have otherwise handled just fine in the past. Do yourself a favor, and start the day with water and a balanced meal to provide you with the energy, and healthy digestive activity that should precede any tea or coffee drinking.

Why You Shouldn’t Drink Too Much Tea

At the end of the day, it’s important to remember that tea is a lot like any other pleasure in our lives. Enjoy tea drinking in moderation. Exercise good habits, especially surrounding a substance like caffeine, and enjoy it as a small part of your day as a whole. Drinking too much tea can eventually lead to health complications that could become serious over time. If you’d like to learn more about how much caffeine, or tea in take is right for you speak to your licensed medical professional. Were you aware of any of the possible negative effects of tea? Hopefully you’ve gained some valuable tips on tea consumption so you can enjoy your favorite beverage in peace!