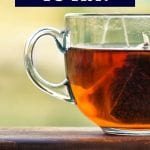 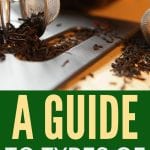 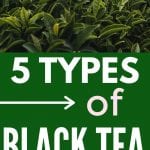 There are four main kinds of tea: black, white, green, and Oolong. Like the others, black tea is derived from the leaves of the Camellia sinensis plant, but processed differently. The most popular of the four, black tea is made up of several different types, each with its own distinct heritage and flavor.

To produce black tea, the leaves are left to dry for up to a day. They are then cracked, exposing the enzymes to the air, to begin the oxidation process, which other teas go through to a lesser extent, if at all. When oxidation is complete, the once green leaves are left either deep brown or black.

Though there are many different varieties of black tea, generally named after their geographical birthplaces, there are a handful of common ones popular throughout the world.

The first of our five types of black tea is the world renowned Assam tea! The Assam Valley is located In northern India. The world’s largest tea-growing region, its eight hundred tea estates produce 150 million pounds of tea annually. Enriched by the floods of the Brahmaputra River as well as the tropical climate, the Camellia sinensis bushes thrive in the Assam Valley.

Assam tea is usually derived from a combination of native Assam plants and Chinese tea.

Due to the climate and the nutrient-rich soil, Assam tea is characterized by its full-bodied, robust, and malty flavor. Assam leaves are best steeped three to four minutes, as the taste turns bitter after six, and mixed with milk and sugar.

The elite reputation of the Darjeeling label has earned it the nickname “Champagne of teas.” Grown in the hilly areas of the Darjeeling district of West Bengal, India, where the soil is moist from the misty air, genuine Darjeeling leaves are plucked exclusively from one of only eighty-six tea estates.

Since Darjeeling is such a coveted and expensive tea, with only 22 million pounds produced annually, the Tea Board of India issued a special logo in 1983 for consumers to differentiate between true Darjeeling and its counterfeits.

There are four types of Darjeeling tea, classified by their harvesting seasons. The Easter Flush, harvested in March and April, produces a lighter colored, brisk-flavored tea. The Spring Flush, from May to June, yields an amber-colored tea with a fruity, mellow taste and a stronger muscatel (grape) flavor. July to September’s Summer Flush produces the strongest tea. The Autumn Flush from October to November makes for a copper-colored tea with a delicate taste.

When taken with milk and sugar, Darjeeling tea is best steeped for five minutes. Otherwise, three to four minutes is optimal. Darjeeling is also a popular iced tea, enhanced with a slice of lemon.

Ceylon tea comes from Sri Lanka, formerly called Ceylon. Tea plant seeds were first sown on the island country in 1867, and when a devastating fungus destroyed the nation’s prosperous coffee crops in 1869, the estates turned to tea.

As Sri Lanka is mountainous, the tea is grown at a wide variety of altitudes, yielding many different flavors of Ceylon. There are six main regions of tea estates, and thus, six main varieties of Ceylon tea: Dimbula; Galle; Nuwara Ellya; Uva; Ratnapura; and Kandy. The teas grown in the higher regions are considered the best, with their golden color and powerful flavor tinged with orange and spice.

Similar to Darjeeling, Ceylon teas now have an exclusive logo, cautiously distributed by the Sri Lanka Tea Board, to identify those tea leaves truly grown and packed in Sri Lanka. Ceylon tea is considered high-quality, plucked by hand, using only the bud and the two youngest leaves of the plant.

Best when brewed loose-leaf, milk and sugar are welcome additions to Ceylon teas.

Lapsang Souchong tea is from the Fujian province in China. It’s made from dark leaves with golden tips, withered over pine or cedar fires and fully oxidized, then further dried in bamboo baskets over burning pine. This process results in its distinct smoky aroma and its bold, sweet flavor.

There are two legends associated with the discovery of Lapsang Souchong tea. In one story, the workers at a Qing dynasty tea factory found themselves rushed to send some tea leaves to market. To hurry the drying process, they lit fires of pine wood and dried the leaves over them. The smoky tea leaves were an unanticipated success. Of the five types of black tea, this is perhaps the strongest.

Another legend says that as tea leaves were taken from China to Moscow, a journey which often lasted an entire year, they absorbed the nightly campfire smoke. This story gave rise to Lapsang Souchong’s nickname, “Russian Caravan tea.”

An amber-red tea, Lapsang Souchong is one of the strongest varieties. And is often called a “man’s tea.” It is said to compliment spicy or salty foods.

Nilgiri tea leaves are grown in the Nilgiri region of southern India, high in the Blue Mountains, where the high altitude and abundant rainfall help to produce a tea that is robust, smooth, and brisk. Nilgiri tea, with its slight lemon flavor, is considered one of the most distinctive tasting teas.

Instead of rolling the leaves for the oxidation process, the leaves are crushed, torn, and curled, a process known as CTC. This method, developed during World War II, allows for more tea to be packed into teabags.

Nilgiri tea is good with or without milk and sugar, steeped for three to four minutes. It makes a good iced tea, and is often used in chai blends.

With so many different kinds, drinkers of black tea have a wide variety of choices. From bold and smoky to light and fruity, each black tea has its own flavor and its own individual allure. Hopefully you’ve enjoyed learning about these five different types of black tea. Were you surpised to learn the origins of these teas? Give it a thought next time you enjoy a cuppa that includes a blend of one of these teas!