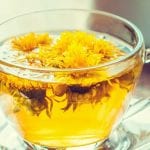 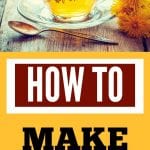 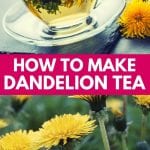 If you’re wondering, what’s better than a plant that gives wishes?

Well, the only thing better in the real world is a plant that provides health benefits.

One of those plants is called the dandelion, and not only is it an excellent food, but it is an extraordinary medicine too.

Most often than not, dandelions are seen as pesky weeds that tend to take over your lawns and gardens.

How to Make Dandelion Tea: A Powerful Health Drink

However, the opposite is true. Dandelions regenerate soil and pave the foundations for plant growth.

Not only are they good for the earth, they’re good for your diet too!

Lucky for us it’s also excellent food and great medicine that anyone can find, grow, and then put to use.

In the following article, we will take a look at the health benefits, uses of dandelions, and how you can use this weed to improve your quality of life.

What are the health benefits of dandelion?

Dandelions have been used in traditional Chinese healing for appendicitis, breast concerns, and stomach problems for decades.

Europeans used it to alleviate symptoms of diabetes, diarrhea, and high fever.

Dandelion is a rich source of beta-carotene which converts into vitamin A in the body. This plant is also rich in fiber, potassium, vitamin C, calcium, iron, magnesium, phosphorus, and zinc as well.

It’s also a good way to get more vitamin B to your body as well as trace minerals, vitamin D, and organic sodium.

Additionally, the plant also contains even more protein than spinach.

Some health benefits of the plant, its roots and leaves:

Although the ability to fight cancer is not a claim that should be made lightly, dandelion has shown lots of promise in various cancer studies.

It is suggested that dandelion may slow cancerous growth and prevented it from spreading.

The leaves are rich in phytonutrients and antioxidants that fight cancer, and the root extract can choose apoptosis or cell death in certain types of cancer.

Is it safe to make tea from a dandelion?

Dandelion is known as Lion’s tooth and blowcall. It’s also a botanical herb used in traditional medicine by the Native Americans, Chinese as well as Arabs.

In centuries gone by, it is been used to treat certain conditions such as toothaches, fevers, baldness, and lethargy.

It’s also been used to treat other medical issues, such as liver and gallbladder problems and bile ducts.

It is still consumed today as both a food and part of complementary alternative medicine.

When used as a food, they can be used raw in salads the same as you would do with spinach.

The roots are also roasted and used to make caffeine-free coffee. The flower of the dandelion is often used to make wine.

It is most commonly known as a botanical herb and supplement and is available in various forms of teas, pills, and extracts.

As a vegetable, it’s rich in many minerals and vitamins.

As a herbal tea, it’s praised for many benefits, and one of its most well-known health benefits is being a diuretic and consequently aiding digestive problems.

Although dandelion health benefits are praised by many cultures and alternative medicine believers around the world. There may be some associated risks with it as well.

Before rushing off to consume Dandelion, you should be aware of the side effects involved.

Perhaps the most common side effects reported after consuming Dandelion are allergic ones.

People who have allergic reactions to chrysanthemums, ragweed, Marigolds and daisies are also consequently allergic to Dandelion.

You should also be aware that Dandelion contains gastric hyper-acidity, which could cause some mild discomfort and stomach pain.

Dandelion should not be taken in conjunction with any lithium since it is a diuretic, and it increases the body’s loss of sodium and water.

You should also steer clear of it if you’re taking any hypoglycemic drugs because Dandelion already has blood sugar lowering properties.

Dandelion does, however, have lots of health benefits, and you should apply the same principle with this herb as you would with any other medicine, drug, or treatment, and that is to take it in moderation.

Ultimately Dandelion is a healthy vegetable and makes quite a soothing tea; however, you should not put all of your faith into this one single herb.

How to make dandelion tea from Leaves?

Making Dandelion tea from the roots

Visit Crafty Little Gnome for an alternative method, where she shows you how to make dandelion tea from roasted roots.

Making Dandelion tea from the leaves

Is Dandelion tea good for you?

Yes, Dandelion has many health benefits.

Which part of the Dandelion plant is safe for consumption?

You can consume the roots, leaves and flowers of the plant.

Are there any side effects to drinking Dandelion tea?

Yes, for people who are allergic to other plants, it may lead to allergic reactions.

9 thoughts on “How To Make Dandelion Tea”