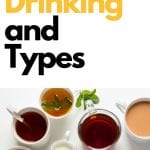 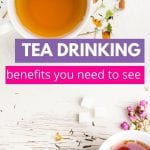 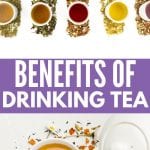 Tea in all of its varieties are known to the world as a powerful antioxidant. It’s also an overall healthy beverage. Enjoyed as the most widely consumed caffeine drink world wide, there are numerous health benefits of tea drinking. Tea drinking can also be used as a preventaive measure. Maybe even helping us maintain our long term health and vitality.

We’re going to explore the many varieties of tea, some historical perspective and known health benefits of tea in this handy primer for tea lovers! Brew yourself a cup of your favorite tea and learn what makes it so special and highly revered as a beneficial and delicious drink choice.

The legend says that in 2732 BC, Shen Nung, the second emperor of China, was drinking a cup of hot water. Heating water was for centuries the easiest way to remove impurities. Some tea leaves accidentally blew into his cup of hot water, and the rest is history! By 400 AD tea had become a central aspect of Chinese culture.

The detailed recipes of tea and preparation methods to enhance its flavor by adding spices and citrus concentrates were documented. Followers of traditional Chinese medicine have long since touted the health benefits of tea drinking. As such, they have heavily promoted its consumption. Gradually, as Chinese trade developed with other countries the culture of drinking tea also began to spread.

Tea is the most widely consumed beverage all over the world. (Next only to water.) Brewed tea is a healthy drink that can boost our immune system, and aide in the prevention of heart ailments. It can also help with cholesterol regulation, and combating harmful bacteria. Tea plants propagate from seeds or cuttings. It takes 3 years before a plant is ready for harvest.

Only 1-2 inches of the top of a mature plant called flushes are plucked. New flushes appear every 7-15 days during growing season. Leaves that develop slowly always produce better flavor and taste. For the ease of plucking a Tea plant is pruned to waist height. Basically two varieties are popularly cultivated: The Chinese plant (C. sinensis sinensis) and the Assam variety (C. sinensis assamica). Both of these teas provide numerous benefits, but just how many types of tea are there?

There are many types of tea available throughout the world. Because of this, the classification of tea is based on how it’s grown and processed. All tea we know today is made with the Camellia Sinensis plant.

You differentiate teas on the basis of processing and geographical conditions of cultivation.

During the process of oxidization the water in the leaves evaporates. Subsequently, the leaves absorb more oxygen. Black tea has the most oxidization of any type of tea. It’s also relatively stronger in taste. It also has highest caffeine content.

Green tea is the least oxidized type of tea. The caffeine content seldom exceeds 30%. Many claim it has the potential to lower the risk of heart disease. Not to mention its high natural antioxidant content.

Oolong tea is the most popular tea in China. And is one of the most sought after teas in the world. The oxidation level of this tea falls between black and green tea. It can be described as somewhat stronger than black tea. But milder than green tea. As a result, the benefits of drinking oolong tea are plentiful.

White tea goes through little oxidization. Young tea buds are used to prepare white tea. That make it quite similar to green tea. It has the most subtle flavor of any variety, with a natural sweetness associated with it. Much like green tea, it contains natural antibacterial properties.

It is a type of black tea which has been oxidized twice. It’s therefore stronger than plain black teas. Tea is crimson in color, hence the Chinese nickname ‘Crimson Tea’. (Which is another name for Puerh.) You can process Puerh in a variety of different ways. This makes it a tea with rich regional characteristics throughout mainland China. Fermenting these leaves adds to the already numerous benefits of tea drinking.

Pure tea without milk and sugar is devoid of calories. A cup of brewed tea is a rich source of minerals such as magnesium, phosphorous, potassium, sodium fluoride and folate. Other nutrients present in Tea are vitamin C, thiamine, riboflavin and vitamin B6. Tea also contains potent oxidants such as catechins, polyphenols and flavonoids.

Is There any Such Thing as Too Much Tea?

Tea is a delicious and healthy beverage option for most people. But you can have too much of a good thing! Those suffering from health conditions prohibiting the over consumption of caffeine can quickly exceed their daily caffeine limit easily by drinking too much tea.

The preparation method of tea also affects just how much one should drink. Added sugars are very prevalent in black tea consumption. You wouldn’t want to eliminate the benefits of tea by adding too many refined calories. That is to say, adding lots of table sugar, honey or sweeteners quickly turns our cup of tea into something that should be consumed in moderation.

The daily consumption of tea provides numerous health benefits. The science on the subject is plentiful. Especially considering the fact that tea is the most highly consumed form of caffeine in the world!

One of the benefits of tea is that it has the potential to provide our bodies with a whole range of bonuses to promote our overall health! All teas, but particularly green tea contains a relatively high level of antioxidants. Paired with a healthy lifestyle and balanced diet, this may help reduce the number of cancer-causing free radical cells in our bodies.

The flavonoid content of some teas can also decrease lipid oxidation. This effect is linked to lower rates of stroke and various cardiovascular diseases. On the subject of cardiovascular health, it’s also worth noting that the caffeine content in tea aides in promoting healthy circulation of blood throughout the body.

Generally speaking tea can contain a relatively high level of fluoride. Region also affects this. Tea plants can absorb fluoride through the soil while collecting water and nutrients much like any other plant.

The science involving fluoride in our society is defiantly a contentious issue. Some believe that fluoride levels in consumer products like tea can actually reduce tooth decay and disease. Tannins present in tea can also aide specifically in the reduction of plaque build up.

It’s potent in the compounds like catechins polyphenols. And green tea in particular possesses natural antibacterial properties. Besides eliminating oral bacteria, it also promotes lower levels of free radical cells in the body. Some might say it’s a great natural anti carcinogen! The benefits of this tea are plentiful.

Hopefully we’ve given you a whole list of tea drinking benefits so you can continue to enjoy your favorite brew! While the benefits of tea drinking are nearly endless, so are the different ways to drink it! How do you take your tea?