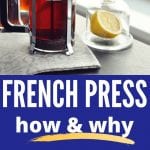 You want to brew your own tea but you don’t have a strainer or infuser right now.

You do, however, have a French press that you use to make coffee.

Why would you use your French press to make tea?

Not only is it an easy way to brew tea, but it essentially works in the same way as coffee. Instead of putting your favorite ground coffee into the press, you just put loose leaf tea in it.

That said, there are some important things to bear in mind if you’re using your French press to make tea instead of coffee so that it’s the most delicious cup.

Here’s our step-by-step guide on making tea with a French press, along with some pro tips to ensure the best quality.

Once you try making tea in a French press, you’ll never want to do it in any other way!

How To Make Tea In A French Press

If you’re interested in trying to make French press tea, here are the steps you should follow:

Tips To Take Your French Press Tea To The Next Level

Now that you have read all the steps you need to make tea in a French press, there are some extra tips and tricks to help you make the most delicious cup of tea with this method.

Don’t Steep It For Too Long

Earlier, we mentioned that you should steep your tea for certain amounts of time depending on the type of tea leaves you’re using.

But, you might think that longer steeping times can only be a good thing.

Although you might think to steep tea in your French press for longer than the recommended time will make the tea even stronger and release more of its healthy compounds, this isn’t true.

If you leave the tea to steep for too long, it will negatively affect its taste, making it bitter.

You Can Make Frothy Milk With Your French Press

If you like to add frothy milk to your tea, you can easily use your French press to make it.

All you need to do is fill a third of your French press with warm milk. Pump the metal plunger for about half a minute, and that’s it!

Pour it into your tea and enjoy a creamier, more luxurious cup of tea. This is great because your French press has so many uses!

You Can Also Enjoy Iced Tea

Did you know you can make iced tea in your French press?

This is important so that you’ll be able to taste the tea when it’s been diluted by ice, as Java Presse explains.

The actual brewing process is a breeze. Make the tea in the same way as we discussed earlier in this article.

Then, when you’ve steeped the tea, pour it over ice. Delicious on a hot summer’s day!

Wash The French Press Well Before Use

Earlier, we mentioned that it’s important to wash your French press before using it to brew your tea.

But you really need to wash it thoroughly. Here’s how:

Get The Temperature Right

You can’t make all types of tea with the same water temperature.

You have to follow the correct guidelines depending on the type of tea you’re making.

If you’re brewing green tea in your French press, you need to heat the water so that it’s between 150 and 170 degrees Fahrenheit.

You should see steam rising from the water, as Leaf reports.

For herbal tea, make the water hotter – aim for around 180 to 200 degrees, so that you can see bubbles forming in the water.

As for black tea, it requires temperatures between 190 and 200.

Since you’re going to be boiling water in a separate container, such as a kettle, before putting it over the tea leaves in your French press, it’s a good idea to choose a kettle that has a temperature gauge.

This will make your job much easier and it will ensure that you always use the correct temperature for brewing your own tea at home.

Don’t Push The Plunger Too Far

You know when you’re making coffee in a French press and you push the plunger all the way down?

You really shouldn’t do this when making tea in a French press because it can break and damage the tea leaves.

Contrary to what you might think, tearing the tea leaves doesn’t allow their flavor to be released – it actually has the opposite effect of making the tea become bitter, especially if you want to reuse your tea leaves for a second cup.

Pour Some Water Into The French Press Before Adding Tea Leaves

This is a clever tip to ensure that your French press has the right temperature to brew your tea and should be followed even if you have a temperature gauge on your kettle.

When the water is ready, pour some of it into your French press before adding the tea leaves.

Swirl the water around so that you warm up the surface of the French press.

Then, pour the water out and add your tea.

The benefit of doing this is that the heat from the hot water will help to steam the tea leaves, making them open up to release their flavor.

What French Press Is The Best For Tea?

If you’re interested in buying a new French press to brew your tea, make sure it has the following features:

Are there French presses made for tea?

Yes, they are manufactured specifically for the brewing of loose leaf tea.

They have a tea press that stops leaves from being steeped for too long, which will prevent negative effects of over-steeping, such as a bitter taste.

Is stainless steel a good material for French press tea?

However, some people complain that it changes the taste of coffee because it reacts with the metal, so it will probably also affect the taste of your tea.

As you can see, it’s really easy to make tea with a French press.

In this article, we’ve looked at a step-by-step guide on how to do it, so that you can enjoy tea in a fresh new way.

We’ve also featured advice on how to take your tea-making craft to a new level, such as by making sure you steep the tea leaves for the right amount of time and at the right water temperature.